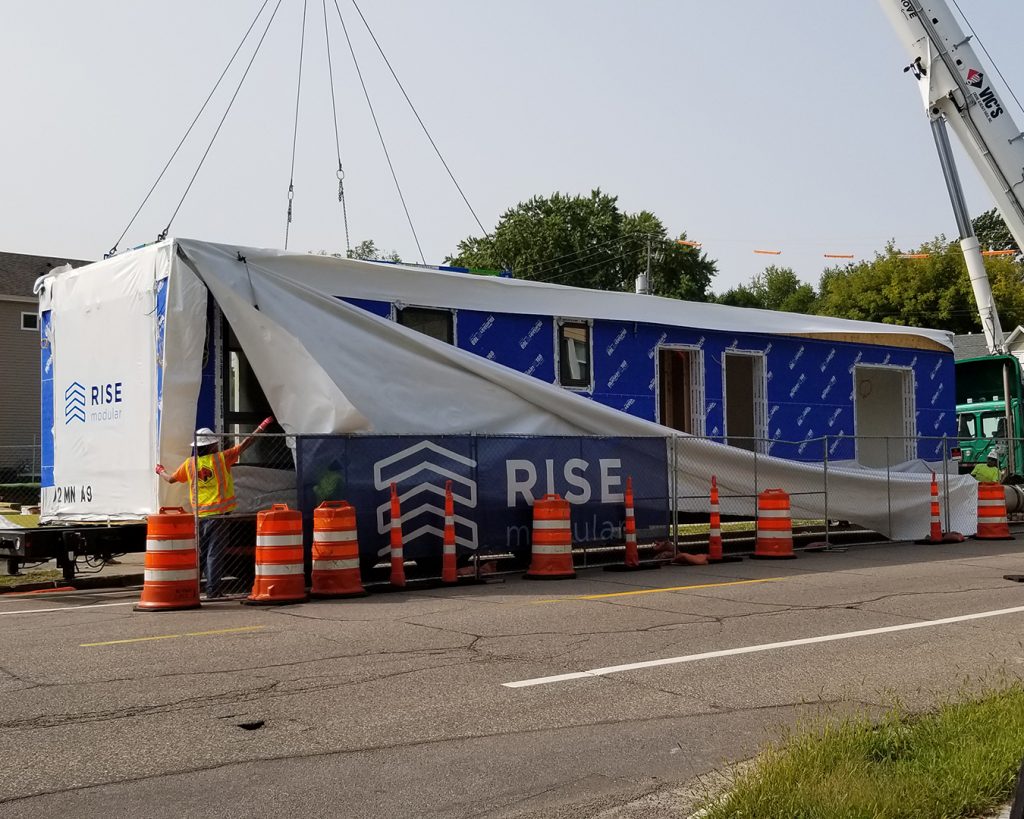 It wasn’t just neighbors who watched in wonder as an entire pre-constructed apartment building was stacked in place by a crane in South Minneapolis last week. There were also representatives from development companies and construction firms wanting to get a first-hand look at an innovation some say will revolutionize the industry.

The company stacking the apartment building is Minneapolis-based Rise Modular. Last November it bought a 141,000-square-foot warehouse in Owatonna and by May it was constructing an entire 30-unit apartment building inside the plant with a staff of 51 trades workers.

The building was constructed in 27 “mods” that were then trucked one-by-one to a construction site at 3200 42nd St. S., near Hiawatha Avenue. You could already walk through nearly completed mods during the stacking last week. The units had toilets, refrigerators, kitchens, flooring and drywall.

Demolition and digging on the site began in May and the building could be ready for occupants by Thanksgiving, a construction time of seven months, which would have been even shorter if not for the training of new employees and delays to implement a Covid-19 safety plan at the warehouse, said Rise CEO Christian Lawrence.

Minneapolis developers Ackerberg and Northland Real Estate Group are using Rise Modular on a much larger project in St. Paul, which will stand seven stories and have 192 apartments. That project will begin this month.

And Lawrence said a third Twin Cities project, with 280 units, will be constructed after the St. Paul project.

Actually, a whole lot of people want to be second, third, fourth and so on.

At the project site on Wednesday, representatives from Plymouth-based affordable housing developer Dominium and Minneapolis general contractor Weis Builders were on hand watching.

Once it hits it full stride, Rise Modular will be able to construct four mods in a day and produce 1 million square feet in a year, Lawrence said.

Modular construction has gained traction on the coasts and in some other markets. But developers in the Twin Cities have never had a nearby plant to serve them if they chose to go the modular route. Trucking the mods long distance can get highly expensive.

The advantage of modular, Lawrence said, is that it costs less than traditional construction and also shortens the timeline by 30% to 50%. Since the units are built in a warehouse, construction workers need not move around the region and sleep in hotels. They can work in their T-shirts all year round, avoid heights and don’t have to worry about slipping on wet surfaces.

Ackerberg CEO Stuart Ackerberg his St. Paul project will be completed in about 12 months instead of the 16 months it would have taken using normal construction. That means he can get the building leased up and begin collecting rent four months earlier. Because of that, he anticipates the project, called The Alvera, would charge rents below other new projects along West Seventh Street near Xcel Energy Center and United Hospital.

“We’re very excited about this being, for the most part, workforce housing available for all the hospital workers, people who work at RiverCentre and who work at the Xcel Energy Center,” Ackerberg said. “We’re creating a very economically efficient and and attractive pricing model.”

Ackerberg said his company is always looking for way to innovate and become more efficient, and he and remembers touring a modular homebuilder in Wausau, Wis., in the 1970s.

He toured Rise Modular’s plant and met with its leadership, which includes a vice president of operations brought in from modular builder Dynamic Homes of Detroit Lakes.

“We had some pause on that for a moment and thought, can we get comfortable with a group that has an amazing track record of resumes but has not worked together?” Ackerberg recalled. “Over the last handful of months, we’ve gotten to know them better. We’ve become very comfortable that they’re the real deal. There might be a learning curve and some hiccups we go through together, but we like the way they approach things.”

Dovolis connected with Rise Modular three years ago and has been working with them since. He will be the architect on at least the first three projects and introduced Ackerberg and Lawrence.

“There is a lot at stake, and that is why it’s taken us three years to really research, develop, analyze and put it together. It wasn’t like someone just snapped their fingers and it happened,” Dovolis said.

Already about 30% of DJR’s developer clients now want to do a modular construction project, he said, which is up from none a year ago.

“Most people want to touch and feel it, look at it and walk through it,” Dovolis said.

That, he said, will happen first at the South Minneapolis Mod42 project, but on an even bigger level when the Ackerberg/Northland project is complete, because that complex is similar in size to most of the multifamily construction going on in the Twin Cities.

“When West Seventh is done, they will realize this works at scale and this has a big impact,” Dovolis said.